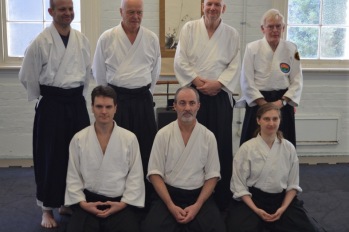 Last weekends Great Ocean Aikido Spring camp in Sydney was my first time on the mat in quite a while and memorable… for all the right reasons.

Saturday kicked off with a full program exploring the gamut of what we know of as Aiki. Sunter senseis exploration of the of atemi in the art of aikido through the vignette of TFT (Target Focused training) was an enjoyable revisitation of this method that we enjoyed some experience up in Brisbane a few years back (see reviews here and here). Whilst on the surface the exploration of the tool of violence might seem to be at odds with Aikido practice the training method really closes the gap  through teaching and practicing 100% focus with no thought of oneself, dodging or blocking has so much in parallel with that power of the mind and extension (did I say ‘Ki’… well almost), finally to understand the tool of violence is to best to be able to choose not to use it.
Of course no good deed goes unpunished and I was invited to share a little more on the biomechanics of Aikido I have been working on(here is last times look at toppling). My aim was to give nage the experience of being O’Sensei, achieved through removing all of Uke’s power and thus avoiding the trap of having to be powerful to do powerful aikido. Thankfully the thought experiment developed with ( Sunter and Nicholls Sensei) was also manifest on the mat where new comer to longtime practitioner were able to throw Uke with ease, pass the Ki test of unbendable arm (because there was no longer any Ki test to give), resist having nikkyo being applied to them and where uke were unable to strike….phew!!! Next up was to demonstrate this in simplified kata for which I chose to present as Nami-waza,  as the technique itself resembles that of a wave (Nami being Japanese for wave) and then the class were invited to find or show this in existing kata or one of their own creation.
We spent some time in the afternoon with  more training and experienced a more rounded aikibody experience with Sunter sensei’s spinal mobility exercises used to round out O’Sensei’s Rights of Spring.
After lunch we spend some time reminiscing on what was ‘AikidoTM’ of today vs Aiki-Do, the way of studying the art of ‘Aiki’. For us it boils down to the practice of Aikido through:

After a late night discussing all these things, all to soon it was Sunday and time for the yudansha gradings.

We were fortunate to have presiding on the Aikido in Sydney’s grading panel Andrew Sunter(head Instructor for Sydney, Jim Nicholas, Gordon Griffiths (a level 4 NCAS coach and Koshinryu Jujutsu Australia y7th dan from the AJF) with myself bringing up the rear.
Mel was first up and can I say what a transformation has taken place since I last saw her a few years back. She mastered and controlled the line between uke and nage before taking ‘aiki’ and finishing each technique for a very strong Shodan. Mike was next and with the calm focus of a tiger behind the shoji screen he was always in control for Sandan. The final candidate was Bob running off the back of 2 evenings family celebrations and taking ukemi for the previous 2 gradings gave a masterful demonstration of ‘show us what you have got when you have nothing left to give’ also for a strong Sandan. I don’t think I have ever seen such capable gradings as these three, they are an exemplar of what sustained training and dedication can yield, a credit to Sunter Sensei’s instruction,  the collegiate learning of the dojo and the benefits of focus on traditional aiki arts that is informed by  science and combatives to produce very strong aikidoka.
best wishes,
Dan